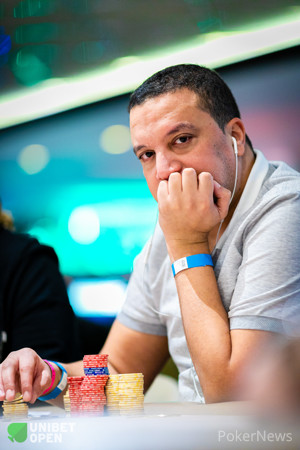 After a mammoth 14-hour day brought to you live right here on PokerNews, the final table of the Unibet Open Paris Main Event is set, with the final nine players returning tomorrow ready to battle it out for the title and €89,070 that awaits the winner.

And it will be Omar Lakhdari who leads the way, with more than a quarter of the chips in play. He sits with an impressive four million in chips after a barn-storming Day 2 that saw him rocket to the top of the chip counts midway through the day and stay there.

Lakhdari is well-known among the French poker circuit, with a string of results on numerous tours across Europe. His best result on the Unibet Open tour came when he took down the High Roller event in Cannes in 2015 for €24,000. He also made the final table of the Unibet Deepstack Open Main Event in Divonne two years ago for €11,550.

From the 105 players that started Day 2, just 63 would cash and Mathieu Selides, Dehlia De Jong, Unibet Open Malta Champion Alan Carr and Unibet Poker Ambassador Dara O’Kearney were among the unfortunate players to miss out.

The bubble burst when short stack Roger Hairabedian was eliminated. He was all in from the big blind holding ace-jack but ran into the set of Florence Allera to bust short of the money.

At this stage, start-of-day chip leader Leibgorin was still sitting pretty at the top of the chip counts, but the elimination of Jeffrey Nolten would hand Lakhdari his first big boost and he joined Leibgorin in seven-figure stack territory.

With the tournament down to two tables by dinner, Lakhdari still led the way, but it wasn’t long before the likes of Benjamin Davo and Giuseppe Zarbo started nipping at his heels.

By the time the tournament was down to two tables, there was still time for both Leibgorin and Dung Le Quoc to enjoy rollercoasters, with Le Quoc recovering from just a handful of blinds to bag fifth in chips come close of play.

But while Le Quoc was doubling repeatedly on the feature, Lakhdari was doing the damage on the outer table which ensured that he will be in pole position come Sunday when play resumes at 12 pm.

The updates here on PokerNews will start at 12:30pm in line with the live stream, which you will also be able to watch by clicking the link above. Stay tuned as we crown the latest winner on the ever-popular Unibet Poker Tour.