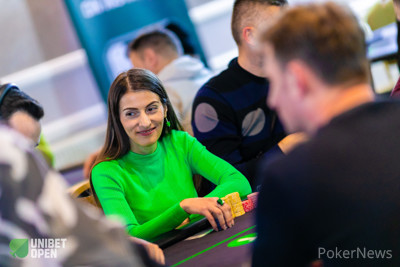 Luciana Manolea has boosted her stack significantly and sent Marius Pertea as well as Andy Hills to the rail.

According to Hills, Manolea bet a four-flush river and Pertea moved all in with :::Kx{10x} to get called by Manolea with the :::Qh in her hand.

Apparently, the duo had played in the SuperStack Side Event the previous day where he saw Manolea three-bet very frequently. "I called because I thought ace-king would have gotten it in preflop," Hills added before heading out of the tournament area.