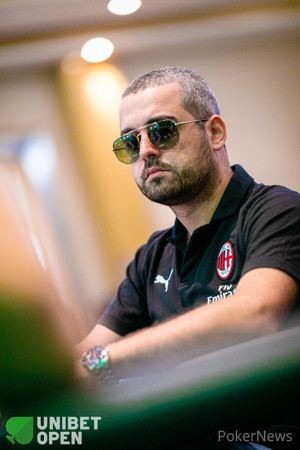 Three players headed to the flop with around 7,500 in the middle. The flop came :::tc:::8h:::3s and the action checked to Kristian Aksnes on the button who bet 3,600. Jozsef Hegyi folded in the big blind and Renato Messina called from the hijack.

The turn was the :::7s and Messina check-called another bet of 7,200 from Aksnes. The :::as completed the board and Messina checked for the third time. Aksnes slung in a bet of 18,500 and Messina went into the tank for over two minutes. He eventually slid out a raise to 59,000 and now it was Aksnes who needed to think.

After deliberating for a couple of minutes as well, Aksnes eventually threw his :::3h:::3d into the muck and Messina collected one of the largest pots thus far.

Unibet Battle Royale on the Livestream