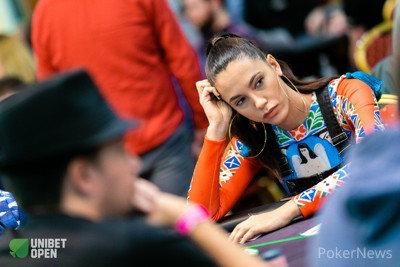 Ana Raluca Bulboaca qualified for the event through an online freeroll and had been nursing a very similar stack for quite some time. Just now, Ricardo Klassen raised to 8,500 and the Romanian three-bet all in on the button, Klassen called and the stack sizes were within a few big blinds.

At the same time on the feature table, David Lappin three-bet all in for 89,000 with the :::Ah:::Ks and Pascal Rabany snap-called from the under-the-gun position with :::Kd:::Kh. Lappin flipped a big sweat on :::Js{10s}:::4s and the :::Qh turn improved him to a straight. No ace but the :::7c came on the river, securing the double for the Irishman.