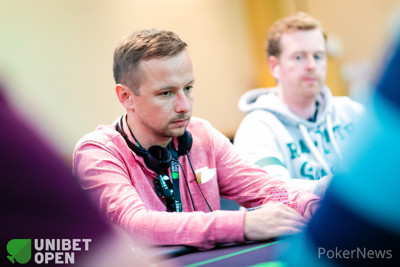 The opening flight of the Unibet Open Malta €1,100 Main Event has drawn to a close after an exciting 10 levels of poker. There were 113 players that gathered in the conference rooms of the InterContinental Hotel in conjunction with Casino Malta but only 44 will be moving on to Day 2.

Leading the way after a resurgence in the last couple of levels is Przemyslaw Zielinski who bagged up a whopping 216,500 chips from a starting stack of 30,000. Zielinski earned the majority of his chips in a massive pot with Kristian Aksnes when the Czech player rivered the best possible full house against a flopped full house from Aksnes.

Zielinski closed out strong by putting his big stack to work in the last few hands of the night and finishing as the chipleader. He will be looking to add to his short-listed poker resume when the action resumes on Day 2. Zielinski has just two recorded tournament cashes, both coming in the last couple of years in the Czech Republic.

Meanwhile, despite finding himself on the wrong end of two huge coolers in the last couple of levels, Aksnes still put 45,000 chips in his bag to return on Day 2. Some of the other big stacks include Alan Carr (201,500), Mikkel Stenkjaer (174,500), and Renato Messina (145,500). Messina was the other fortunate player to take a large chunk of chips off Aksnes before the night ended.

The action kicked off at noon local time with around 40 players in their seats from the onset. That number quickly grew through the opening couple of levels until late registration finally closed after the dinner break. This first flight was played as a freezeout since players will only be allowed to re-enter into flight 1c tomorrow night.

A few familiar names were spotted throughout the day including Barny Boatman, Mateusz Moolhuizen, Martin Soukup, and Unibet Ambassadors Ian Simpson and Dan Murariu. Unfortunately for them, they will have to try their luck tomorrow evening as none of them were able to bag chips by the day’s end.

The action will resume tomorrow at 12 pm for Day 1b which is expected to attract an even larger field. A few other Unibet Ambassadors will be present along with many of the popular streamers. Tomorrow will also mark the debut of the Main Event on the live stream which can be viewed by clicking on the ‘Live Stream’ tab.

Day 1c will also take place tomorrow night starting at 9 pm. That flight will contain most of the players in need of a re-entry but it will be a turbo flight with just 20-minute levels. Continue to follow along with the PokerNews live reporting team for full coverage of both flight tomorrow and throughout the rest of the tournament.

Play Concludes for the Night