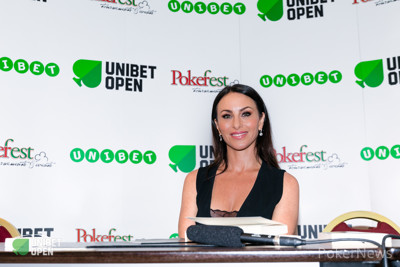 There is tons of excitement in Bucharest thanks to world-class skier turned poker princess Molly Bloom in attendance at the Unibet Open. She hosted the #QueenRules Ladies Event on Friday and otherwise is enjoying her time at the festival and in the Romanian capital.

This is the first time Bloom has attended a Unibet Open. It was her desire to visit a new country and her passion in challenging the gender bias that attracted her to the #QueenRules and the festival.

“Sorin Constantinescu, Nataly Sopacuaperu, and Laura Olteanu called me and reached out to me,” Bloom shared about how her involvement with the Unibet Open began in an exclusive interview with PokerNews. “Basically, what was appealing to me was #QueenRules. I think it is a really cool way to challenge the gender bias. Also, this was an opportunity to see a new country and be exposed to a culture I have never been to.”

Bloom is impressed with what she sees, mainly how well it is run and how civil the players behave compared to games she was hosting.

“I think it is run really well,” said Bloom about the Unibet Open. “The energy and the scene in the room is much different than the poker games I am used to. The level of civility is kind of mind-blowing. It looks like everyone is having fun. It is a lot more relaxed than some of the other tournaments I have been to and certainly the cash games I ran.”

“The games I ran were intense,” Bloom continued. “At the beginning of the night it could be light but by around 10:30 p.m. or 11 p.m. when there are millions of dollars on the table, it’s not light anymore.”

The Unibet Open provides a poker vacation for many of its players, taking them to destinations they may not otherwise found the opportunity to explore. Bloom has taken advantage of her time in Bucharest and when not at the casino has experienced some of the Romanian capital’s rich culture.

“We went to the parliament today and it was unbelievable,” Bloom shared. “I just got fascinated with what is like for people of a certain age in Romania who have really lived two lives. Under the communist region, they basically had their free will stolen from them. And now, living in the same city, it is such a different life.”

Bloom didn’t hop into any of the poker action at the Unibet Open. In fact, despite being around the game, Bloom has never played a hand of poker. However, she finds the game exciting and might one day decide to play.

“Sure, absolutely, my heart starts beating a little faster when I hear the chips,” said Bloom about whether she may have the itch to one day sit down and play.

Bloom’s Involvement in the Poker Community

Whether or not Bloom decides to stay involved in the poker community is anyone’s guess. Regardless, it still shaped Bloom into who she is today.

“I have an immense amount of gratitude towards the game of poker,” Bloom said. “Poker raised me and taught me everything that I know about business, about psychology, and about being David versus Goliath. I really learned so much about this game, so it will always be in my heart and it will always be part of my life. How that plays out in my career or my personal life, I am not so sure yet.”

PokerNews asked Bloom to expand on some of the things she learned from her involvement in poker.

Many poker players that enjoy sports have seen strong parallels between the two. Bloom has an interesting insight due to her competing at the highest levels in skiing before she got involved in the poker world.

“No question,” Bloom responded when asked if there were parallels between poker and skiing. “In both poker and skiing you are alone a lot. It is you against the mountain or the game. I think the one thing that is so critical in both poker and sports is the discipline and the emotional stability of having a game face.”

Bloom wants to help push the advancement of women in a classy way. Her involvement in the #QueenRules Ladies Event fits right into her passion.

“I am for the advancement of women and it doesn’t necessarily need to be just in poker,” said Bloom. “But whenever I am exposed to something that I think is moving the needle or can encourage change in a smart and classy way, I’m in.”

Bloom shared it was important to her to tell her story in a book in part to help her move on with her life.

“Telling my story was a solution to the giant mess I had created,” said Bloom. “I was a convicted felon and was millions of dollars in debt. The tabloids had told my story and they aren’t the best ghost writer. So, I believed that my unique proposition and monetizable asset was the story.”

The Hollywood movie Molly’s Game was very popular and not just with poker players. Bloom discussed with PokerNews about her involvement in the film.

“I worked with Aaron (Sorkin) during the script writing every day for eight months,” said Bloom. “When the script was finished, and they went to shoot it, I bowed out. I didn’t want to be on set. I felt it would make Jessica (Chastain) feel a little bit uncomfortable. She invited me, so it wasn’t her. I just felt like it was the time to let the experts do their thing.”

Bloom shared that the movie told her story well.

“I believe the movie is really accurate,” said Bloom. “All those stories actually happened. But Sorkin wrote smarter dialogue than what actually happened. There were some embellishments like my LSAT score, but he really stuck to the facts most of the time.”

Bloom believes everyone including the actors and actresses did an incredible job. She explained that Chastain’s portrayal of her “raised the bar” of herself.

“I thought everyone did an incredible job,” said Bloom. “It was so crazy to see your life brought to the screen in such an accurate and specific way.

As many people have speculated, not all of the characters in the movie were based on one single individual. Bloom confirmed that in many cases it was a composite of many individuals including the infamous Player X.

Bloom isn’t done telling her story quite yet as she is working on a second book.

“I am working on another book,” said Bloom. “It is going to a memoir that also has a little self-help component to it about what it is like to completely blow your life up and try to put it back together through writing a book, do your publishing, and a Hollywood movie. So, it’s a brand-new world with new characters and new behind the scenes of what that looks like. It will have some real practical applications and giveaways on like what to do when you blew your life up, if you want to start over, or if you just want to get ahead.”

What Bloom might be up to next is anyone’s guess including Bloom’s.

God, I have no idea,” Bloom responded about where she sees herself in five years’ time. “It was so critical for me to embrace uncertainty when I was going through the case, it kind of got me into this detached place where I am just curious and don’t need to plan so much. It is kind of like an adventure.”