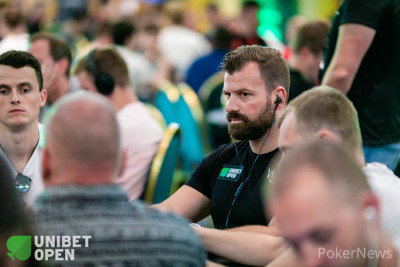 Alexandre Reard opened to 1,700 in early position and Gwennael Belleflamme called from the big blind. The flop came :::ac:::ts:::7d and Belleflamme check-called a bet of 2,200 from Reard.

The turn brought the :::6d and Belleflamme checked again. Reard sized up a bet of 6,900 this time which forced Belleflamme to think for a moment before letting his cards go. Reard scooped the pot and is now in the six-figure club as well.