Runner-Runner House for ‘ONSCREEN’ to Survive

Runner-Runner House for ‘ONSCREEN’ to Survive 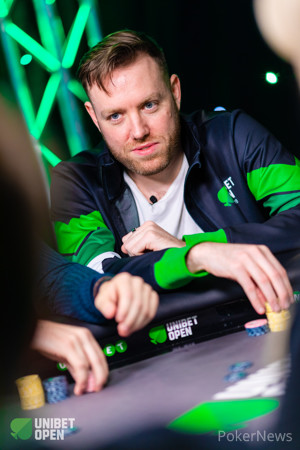 Craig ‘ONSCREEN’ Shannon raised to 4,000 from under the gun and saw Henri Jantunen defend his big blind.

Jantunen checked again, and ‘ONSCREEN’ fired a second street worth 15,000.

‘ONSCREEN’ sat thinking for close to two minutes before he announced all in and saw Jantunen snap-call.

‘ONSCREEN’ tabled :::ad:::jh for top two pair, but in an cooler situation saw Jantunen reveal :::js:::jd for a set.

Both players could not believe the situation they were in, but with 320,000 in the middle, there was still one card to come.

‘ONSCREEN’ had two outs to survive and when the dealer revealed the :::ac river the table roared with shock.

‘ONSCREEN,’ who had less than 1% to win on the flop, had found the runner-runner higher house to seal the massive stack at the expense of Jantunen who was left with 50,000.