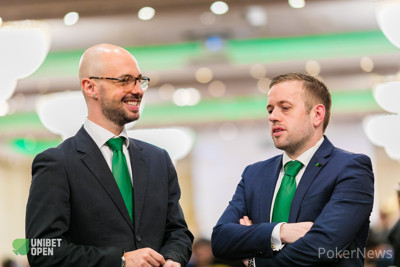 It’s time for the final day of the 2018 Unibet Open Bucharest €1,100 Main Event. The field of 592 players dwindled down to just 17 players in the JW Marriott Bucharest Grand Hotel. The planning was to play down to a final table, but they didn’t manage to do that so they stopped play after 11 one-hour levels. They will be playing for the first place prize of €103,060

Chip leader at the start of Day 3 is Anton Vinokurov. Vinokurov has 2,930,000 in chips and is well ahead of Florin Elisei with 2,485,000 at the start of Day 3. Others that are still in the tournament include Daniel Chutrov (610,000). Chutrov won the Unibet Open Glasgow back in 2015 and is looking to add a second title. Unibet Poker Ambassador David Lappin (505,000) is also still in the tournament.

The tournament will start with 17 players and they have done a complete redraw at the end of Day 2. This will mean that they won’t do another redraw as soon as a player busts out but they will just break a table. They will do a final table redraw when they reach that.

The stream of the tournament will be live right from the start at approximately 12:30 p.m. The live updates will all be posted on a 30-minute delay so it runs along with the stream. The stream can be found attwitch.tv/unibetpoker.

PokerNews will be there to cover the tournament until a winner is crowned in the Main Event.