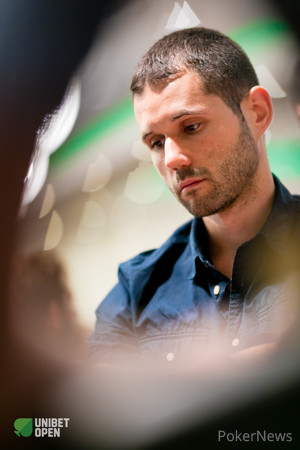 The 2018 Unibet Open Bucharest €1,100 Main Event played 11 one-hour levels. They started with 182 players and didn’t manage to play down to a final table as 17 players will return for Day 3 at noon local time, Sunday, August 5. All the players have secured €5,870, but they’re all hoping to be the next Unibet Open champion while taking down the €103,060 grand prize in the JW Marriott Bucharest Grand Hotel.

The day started with 182 out of 592 entries left in the tournament. The money would be reached at 87 players left and they started the day fast paced. It eventually took a little more than three levels to reach the money. Players that didn’t manage to make it include Unibet Poker Ambassador Rauno “Estonian Jesus” Tahvonen, Deddi Orpaz, Gerret van Lancker, Alex Hendriks, Unibet Poker Ambassador and esports superstar Alan “Hotted89” Widmann, and Unibet Poker Ambassador Dara O’Kearney. Andrei Alecu ended up as the unfortunate bubble boy after he pushed all in with his pocket pair of jacks and he ran into the pocket queens of Elisei, who made Day 3 second in chips.

Another player that managed to make the money was Dutchman Noud van Dijk. Van Dijk managed to qualify for the Main Event from just €0,10. He ended up running his initial buy-in up to a €4 ticket, a €25 ticket, a €250 ticket and eventually a €2,000 package for the Unibet Open Bucharest Main Event. Van Dijk ended up in 53rd place, banking €2,830 which would be a whopping 28,300 times his initial investment.

The players that did make it will return on Sunday, August 5, at 12 p.m. local time. The live stream will start at 12:30 p.m. with a 30-minute security delay because it will be streamed with hole cards. PokerNews will provide updates until a winner is crowned of the 2018 Unibet Open Bucharest Main Event.