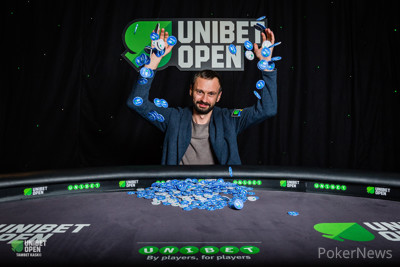 The biggest ever Unibet Open Main Event has determined a winner and it was local player Traian Bostan who completed a Cinderella story to come back from less than four big blinds and emerge victorious. A total of 603 players ponied up the buy-in of €1,100 to participate in the popular live tournament series in the capital of Bucharest, and it was Bostan who lifted the trophy in the Grand Ballroom of the stunning JW Marriott Bucharest Grand Hotel.

The final day saw 15 hopefuls return to the tables and Eli Heath was in the lead. The Brit made it all the way to heads up and eventually finished runner up after a fierce duel for the title and payday of €100,000. The home country made up the majority of participants, however, it was still impressive to see seven Romanians reach the final table. Dan Murariu’s attempt of making further history was halted in sixth place, it was the seventh final table of the two-time Unibet Open champion.

The first casualty of the final day was Nikita Malinovskiy, who returned as one of the top five stacks. After losing some smaller pots, Murariu cracked his pocket queens with king-queen after making a runner runner straight. The next hand, short stack William Hens shoved with ace-ten suited and Malinovskiy called for less in the small blind with king-nine suited – neither player hit anything on the rail and ace-high scooped the pot for Hens.

Cristian Dan joined the short stacks early on as well and three-bet shoved with ace-jack in the second level of the day but failed to improve against the pocket eights of Heath. Soon after he was joined on the rail by Martin Wendt, who called all in with pocket deuces after a shove by Calusaru with ace-queen. An ace appeared on the flop and the Dane was eliminated in 13th place.

Popular Unibet community member Hens then finished in 12th place. He three-bet shoved with ace-queen and Murariu reshoved with ace-king from one seat over on the button. Hens flopped a queen, but Murariu turned a king to then dodge an additional flush draw by the Dutchman on a blank river.

Hens’ countryman Gordon Plomp, who lives in Belgium, was the next to join the rail. After falling short again, he shoved the button with jack-nine off suit and Murariu called with ace-jack in the small blind. Both players flopped a pair with the jack, but the kicker played to eliminate Plomp. Soon after, final table of the last nine was set with the elimination of Roei Motola. The last remaining player from Israel got it in good with ace-ten against the ace-nine of Heath. Both hit their kicker on the flop, but Heath turned trips nines to bust Motola.

Down to the last nine, Bostan was the far shortest stack but it was Juho Launonen who ran out of chips in the very first hand. The three-bet shove of the Finn with ace-king suited was snap-called by Adrian Stefan Calusaru. Bostan then scored a vital triple up with six-four suited against the isolation shove of Murariu with ace-king thanks to a runner runner flush. From there on, it was all about Bostan who kept winning pot after pot.

Ionut-Alin Tambura fell in eighth place when his pocket nines failed to improve against the pocket queens of Cosmin Cimpeanu. Fellow Romanian Eugen Chiva sent his chips over to Cimpeanu as well when shoving the button with king-three, Cimpeanu had eights in the small blind and held up.

Murariu lost a big flip with ace-king against the pocket queens of Bostan for two third of his stack and would eventually boy out with ten-nine against Calurasu’s ace-four suited. Day 1b chip leader Gabriel Gavrila followed in fifth place, his ten-eight suited blanked as Heath claimed the pot with king-jack.

Cimpeanu also fell victim to the run of Heath, three-betting with ace-ten suited and then calling the shove of the Brit to see Heath’s pocket jacks stay ahead on flop, turn and river. The heads up duel for the title was set when Calusaru with pocket tens and Bostan with ace-queen clashed with even stacks. A queen on the flop and an ace on the turn improved Bostan to two pair and that was it for Calusaru.

Bostan already had the Pokerfest.ro last longer locked up as a result and won a package for the next Unibet Open stop 2017 in London. What followed was a hard-fought battle by both Heath and Bostan, with the latter eventually grinding down his opponent. Heath then shoved 14 big blinds with queen-seven off suit and Bostan snap-called with ace-queen suited to see the board run out jack-high.

When all was said and done, the record-breaking festival in Bucharest came to a close. The €2,200 High Roller ended with a three-way deal and Keith Cummins was officially crowned as the champion after striking a deal with Tristan Guiodo and Slaven Popov.

That was it from the PokerNews live reporting team here in Bucharest, but make sure to tune back in next week already for the coverage of the last ever European Poker Tour festival in Prague.