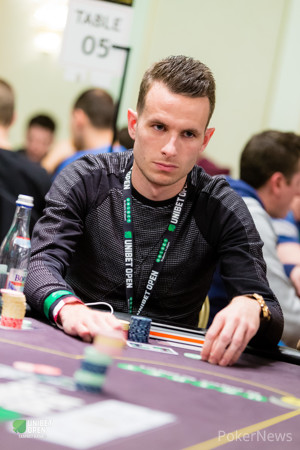 According to a colleague, and also confirmed by Dara O’Kearney who watch the action unfold from one seat over, Peter Harkes had aces cracked to join the rail earlier in the level. Harkes raidsed to 3,500 in the cutoff and David Tobi called in the big blind. On the {10x}:::9x:::7x flop, Tobi bet 5,000 and Harkes raised to 12,500 with a stack of 30,000. Tobi called and the :::8x appeared on the turn.

Tobi now checked, then called the shove of Harkes with :::Jx:::7x for the straight to see the pocket aces of Harkes down the drain. The river brought no split pot, and that was it for Harkes.

A Couple of Big Stacks