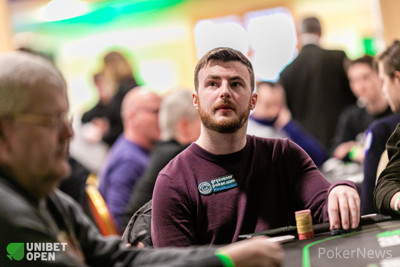 After an excruciatingly long bubble on Day 2, Day 3 will start with a few more players than originally planned. The original plan was to end Day 2 when they got nine-handed on the official final table, but the bubble took more than 3 hours to play out, which pushed the schedule back a bit.

Once the bubble finally burst, Tournament Director Glenn Doyle decided to end the day after the end of Level 20, or about 12:45 AM local time. When they reached that point in the structure there were still 12 players left in action.

It won’t be an easy run for them though. Chomping at their heels is Jamie Nixon who has more than $100,000 in live cashes to his name, and the second stack of 980,000 chips to start Day 3. Unibet Ambassador Espen Uhlen Jorstad is also in the mix, bagging a respectable stack of 785,000 for 5th place. Jason Tompkins will come back to Day 3 with a shorter stack of 295,000, but his nearly $900,000 in live wins proves he’s capable of running that back up again.

The other two players to watch are Niall Farrell and Jack Hardcastle. Both of them secured their seat in Day 2 from the Day 1c turbo flight, but they both came into the day very short stacked. However, they were able to battle it out and build up their stacks to the point that Hardcastle was chip leader for a couple of levels on Day 2, and Farrell maintained a solid stack through the later stages of the day.

The seating assignments and chip counts for the full final day field are below.