Kevmath Gets a Late Double

Kevmath Gets a Late Double 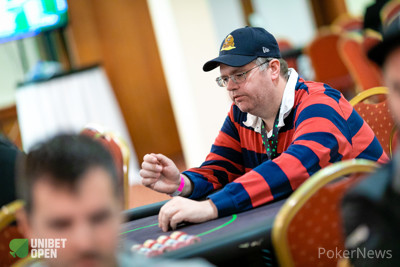 Kevin "Kevmath" Mathers ended up all in and at risk out of the big blind for the last 29,500 and that forced out big stack Elias Vaaraniemi. However, Feargus Murphy had three-bet from the cutoff and called it off to set up the following showdown:

The {10c}:::4c:::2d flop gave Murphy a flushdraw, and Mathers asked for a red card when the :::6d fell on the turn. Two red nines would have been quite cruel for the essential source of all things poker on social media, however, the :::5s river was no threat to let Mathers double.

The Rich Get Richer