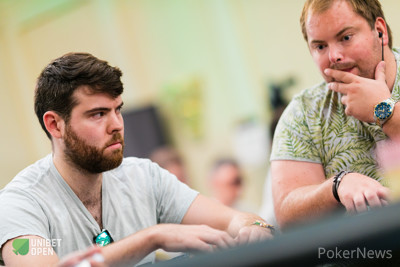 Jack Sinclair has already had a decent festival with a ninth place finish in the Unibet Open Bucharest High Roller yesterday.

It didn’t go as well for him in the Day 1b of the Unibet Open Bucharest Main Event.

Bogdan Diaconu opened for 4,000 from early position before Sinclair jammed for 13,000 from late position. The action folded back to Diaconu who quickly made the call.

However, Sinclair’s Main Event is not over. After his elimination, he quickly headed to the tournament registration desk and is back in action in the Day 1c field with a fresh stack of 30,000 in chips.