Welcome to Day 2 of the Unibet Open London!

Welcome to Day 2 of the Unibet Open London! 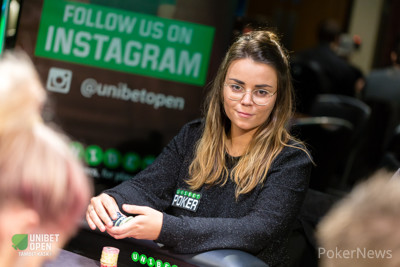 At 12 p.m. local time, the race to the money will commence on Day 2 of the 2017 Unibet Open London Main Event. After two starting days and ten levels of 60 minutes each, 419 players in total gathered to try and win the first stop of the tour’s tenth season. 122 hopefuls bagged up chips and are still in the hunt to become the latest winner of the popular tournament series.

Terry Jordon (356,000) will start the day in pole position, after making a big hero call yesterday that propelled him towards the lead. Giulio Mascolo (327,600) and Gerret Van Lancker (305,800) round out the top three. Notables left include the sole remaining Unibet Ambassador Charlotte Van Brabander (76,000), who’s left without teammates in her quest for glory. Two-time winner Mateusz Moolhuizen (176,000) is also still in contention and in the hunt for his third title.

The PokerNews live reporting team will be there to provide all the action until a winner is crowned on Sunday. You can also watch everything unfold on the Unibet Open live stream, starting at 3:00 p.m. on a security delay of half an hour as well.